The idea of using artificial flies to catch fish kicked-off some centuries ago, but the exact origins of fly-fishing, however, are still unknown.

The common word of mouth is that the practice began somewhere in the Kingdom of Macedonia.

Most people credit England for the success of modern-day fly-fishing. Nonetheless, with the booming of this sport, anglers found a new meaning to nature and life.

It has become the angler’s favorite recreational sport ever since then.

The entire process of catching fish with a fake fly is to trick the fish into eating it. The fish takes the fly, gets hooked, and you take it to the riverbank.

But wait…the process isn’t so simple after all.

The fish isn’t so easy to trick, and with the changing dynamics, the fish has also tamed itself to be smart, hardly giving any edge to the angler.

These are some tips and tactics shared by some discerning anglers that they have practiced and mastered over the years to get some prized species without struggling much.

1. Learn to Scout—Flies and the Fish 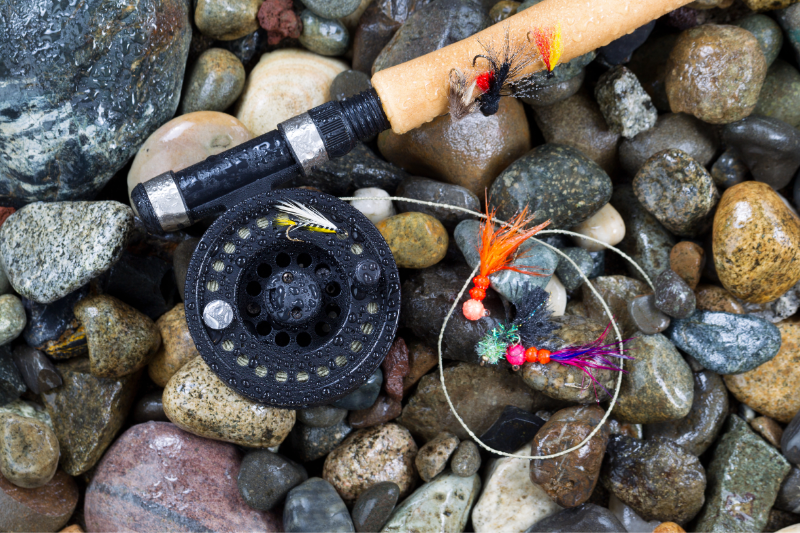 Anglers testify that they had a better day at the waters when they singled out the right lure.

And fish in all areas may not hunt on the same insect/fly.

So, to raise the bar, dig out what insects do the fish of the pond or lake prey upon.

You can ask the local fishermen if you’re at ease with it or use a dip net. Drag it to some lengths in the water you are fly-fishing in, and the tiny insects, nymphs, or other small fish in the net will give you an address for what sort of flies will work in that area.

Pick streamers, dry flies, or nymphs according to that. 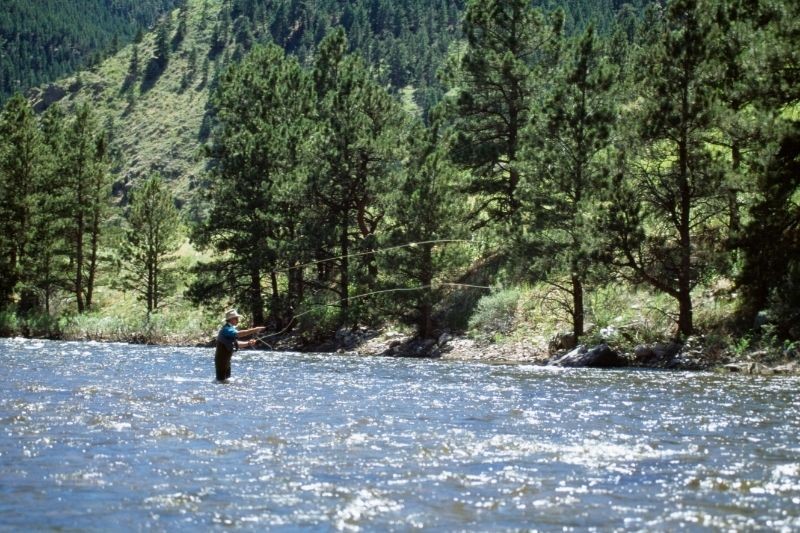 Fish are smart enough to prefer areas such as bank margins, sudden drop-offs, deep holes, or ledges as their hideouts to save their oomph and go out of sight of their predator.

Scanning water before the gig can also help you preserve energy and target the fish better.

Similarly, fishing from downstream of water will not help either. You can try your luck upstream of the river, fish are making runs, and you can use it to your advantage.

Also, learn to mask your shadow when fishing from upstream, and use polarized sunglasses to avoid sun reflections.

Who would want to lose his most sought-after fish prize just after winning it?

NO ONE, I repeat.

3. Color-match the fly—Hit or Miss? 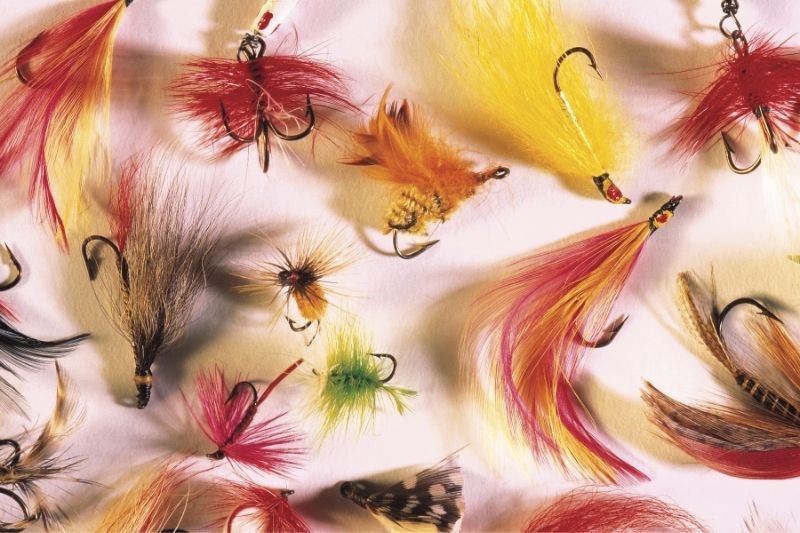 What if you are using the right lure but ain’t getting any chance at catching trout?

There are no rules to it, but it looks like the fish will not take the lure if it is not color-matched with its prey.

Anglers found this pretty dramatic and manipulating at the same time.

They color-match the fly with the fish prey, and 90% of the time, they have luck.

Olive and green woolly buggers are a HIT when fishing trout. 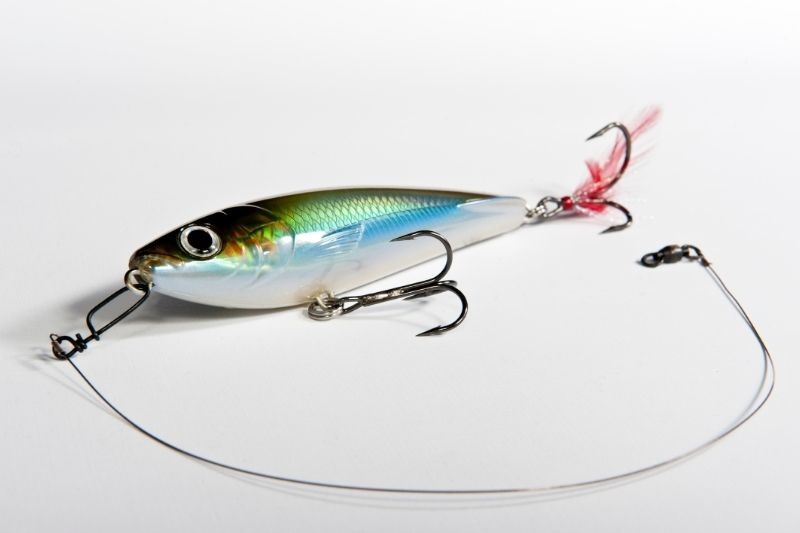 Changing flies can cost you a leader if you are not using tippets. Using one will help you save your taper, and bucks as leaders are expensive.

Tippet sizes often confuse the anglers. Although there is no one-size-fits-all approach for the tippets, using one according to the situation is always a good idea.

For a 12 feet long leader, you can go for a four-foot tippet.

For catching trout, longer tippets will lessen the drag.

You are doing great if everything straightens above the water; the line, leader, tippet, and fly.

If it is not the case, you can always watch how your leader lands on water against the dark background. You’ll instantly get the hunch if your leader needs a revision – if it’s too heavy or too short. 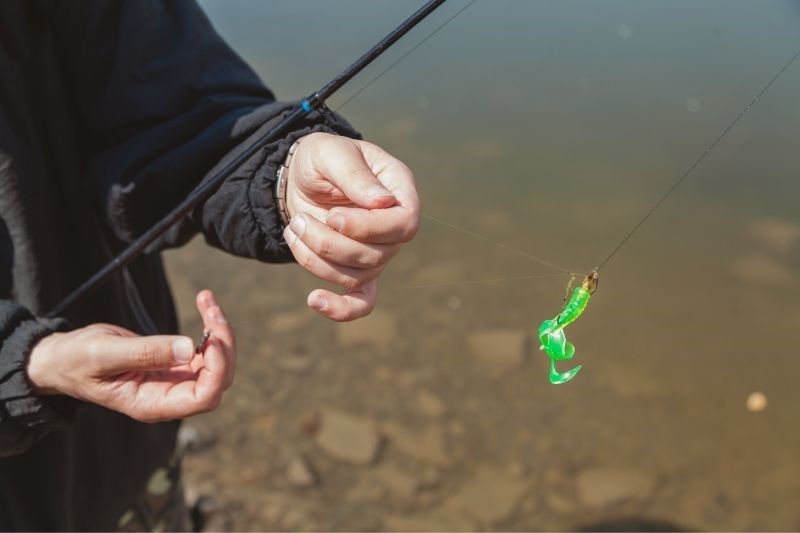 There is a subtle clash between leaders and the anglers, leaders breaking and giving major heart attacks to the anglers when they are out for fishing.

Upon inquiring, fishers oozed out that they prefer learning the skill of hand-tying the leader rather than trusting the machine-made knotless ones.

And they have a point!

Every first-rate angler’s go-to-recipe for catching more fish is that they alter their leader design with the varying fishing circumstances.

Having full knowledge of the taper's construction allows you to build a new one or change the existing one at zero expense. So, if your leader breaks, you can quickly fix it in no time.

Learn to nail knot and blood knot your leader and tippet for improved performance.

Often, you’ll find yourself stuck in a classic tight fishing spot where the overhead cast would be a heck of a job.

Flick out some line in front of you, some 30 feet. With the line still in front, take the rod behind you, keeping the rod tip at 45 degrees from the water, and swing it by pushing your bottom hand downwards and pull it back while the upper hand moves forward with the rod.

This action forms a D-loop.

The line reels out by an abrupt stop in mid-way. Anglers, at this point, raise their rods a little to land the line on the water.

Roll casts are best for eliminating chances of false casting, and it doesn’t spook the fish.

7. Conserve Strength for the Casts 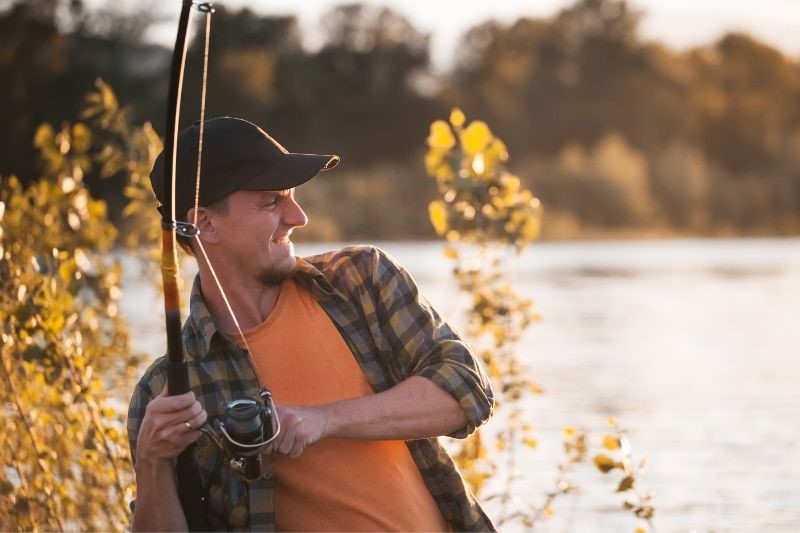 A mistake most beginners commit is they leave space in their arm and body when casting the fly-rod.

This unnecessary waving of arms will only lessen the body’s energy.

The best practice is to limit this space and then cast the rod. It channels your energy into the rod better, resulting in more clear casts.

You can use the newspaper technique here, placing newspaper under the arm and then casting at a distance.

Over the years, so many strategies have developed, and so many have gone behind the veil.

Some tips are still recognized around the world for their efficacy and worth.

Here, we have rounded some of the basic yet valued tactics to help you get through your initial months of fly-fishing.

And before you can say, Jack Robinson, you will have some big fish on your plate for sure!