Drone Fishing – Is It Really Fishing?

For better or worse, recent technological breakthroughs have had a dramatic effect on the way we fish today. Often welcomed by the fishing community, these advancements have generally made recreational fishing easier and more accessible to novices. However, new developments in drone technology are taking fishing to a whole new level. A level where, some say, things are too easy. This raises an ethical dilemma: Is drone fishing really fishing?

Before we get into the ethics of drone fishing, let’s take a look at how people actually use drones to catch fish. There are several drone fishing methods which are not mutually exclusive, but some are more controversial than others. These are:

The use of drones for recon is pretty straightforward. A lot of drones are equipped with high quality cameras which you can use to scan the area below. As long as you stay within regulations, you can explore a fishery until you know it like the back of your hand.

It’s no secret that fish like to gather around underwater structure. When fishing shallow waters, you’re able to scour the area in a matter of minutes. This is exceptionally valuable when fishing an area for the first time. You can also use your drone to scan for currents, schools of bait fish, or even the game you’re after.

If you’re like most people, casting further than 50 feet away is going to be a challenge. With a drone, your cast is limited only by the length of your line. Whether you’re surf fishing or boating, drone casting considerably expands your reach. The best part is, you’re literally casting right where you know the fish are. Fishing drones even have a payload release mechanism so you can drop your line exactly where and when you need to.

You could say that this is overkill – and you’d probably be right. Casting and pulling basically means that the drone will not only place your hook where the fish is, but it will also bring your catch right to you. Obviously, since drones are relatively small, the fish that they can pull in are not big, either.

Using this technique on a shallow lake can allow you to bring in loads of fish  (one more reason to call this overkill). But more on that later.

Newest in the line of fishing drones are the underwater drones. These submersibles can dive into aquatic environments of all kinds: saltwater, freshwater, frozen lakes, etc. They are often equipped with high quality underwater cameras, sonars, bait lines, and sensors of all kinds. 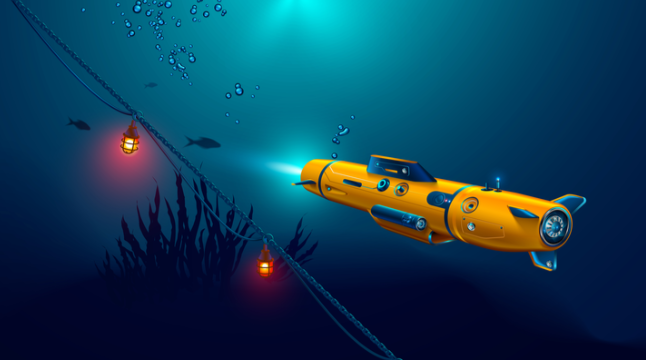 Obviously, with the breakneck pace drone technology is developing, this list could expand very soon.

The advantages of drone fishing for recreational purposes are huge. So huge, in fact, that some say drone fishing is more like cheating. Fishing is an ancient practice, which, at its core, hasn’t changed much over the course of millennia. The new application of drones, however, can fundamentally change the way people approach catching fish. Having things too easy not only takes the thrill out of the chase, but it raises some serious conservation concerns, as well.

The technological rat race seems to have created a void between regulation and reality. Each time a technological leap occurs, lawmakers must scramble to keep up. While some states have outlawed (or regulated) the use of drones for recreational fishing and hunting, many have yet to jump on the bandwagon.

A clear example of this can be found in the very definition of the word “drone.” Most states officially recognize drones as aircraft. Naturally, one has to wonder how much time will have to pass before underwater drones are even considered for regulation.

Due to the mere efficiency of drone fishing, the overexploitation of endangered marine life is a very realistic possibility.

The ability to easily harvest large numbers of fish also leads to one simple, fundamental question: Are we taking the “sport” out of sportfishing? As in many other facets of life, your sense of achievement is tightly connected to the experience, the process that got you to your goal. The mystery that comes with fishing and the likelihood of failure are what makes the catch so gratifying. Take that away, and fishing would be no different than shooting sitting ducks at your local fair.

That’s not to say that all types of drone applications are bad. Marine biologists often use aerial and underwater drones to learn about aquatic ecosystems. Charter captains scan their fisheries to learn about fish habits, current patterns, signs of red tide, and many other occurrences they should be aware of.

But where do you draw the line? A hundred years ago, the navigation systems we use today were beyond anyone’s imagination. The times have changed – sonars and fishfinders are now well established and are considered essential by a large number of anglers. As fishing technology continues to advance, we must learn to adapt. The question is, how do you adapt without losing the very essence of what we call fishing?

If we want to have sustainable fishing going forward, we must answer this, and many other questions alike.

This essay is from: https://fishingbooker.com/blog/drone-fishing-is-it-really-fishing/?__cf_chl_captcha_tk__=aa6aeb5e8c69b90d337f38c770cf49508f52ad84-1622099130-0-AVRwA-raaLDBJRkCoUDnq9BDcE_br16zELmtCvUHy6woAhhlCyAsiOmmAFxd5fNQ0734zx6odom0dLQLkIm4P9R3WWK7STT-PPyKKg1vymL3rs51vhDHPVfYyiAHjukfqDnbkqN8M7I-kowkpC0eRllW8Y9Jt5mbTwX7sUaZmFj-9JnddOhIF3ZIuVDiO3XxWou-VXnu_LBEW7RXudrIg4aFFE_s3sKfb-RuOoGCpaIiAfh7vQAHESf5MxL-XUlmrrvaCgJELBEytBgbhD27KnvsOH_ng_7cLhCjzVd0t6yInADRkV2bBFEPO3MXfxXBktX0BxQ_d55Wa6VhoemgppCgzVU-b0NZc4CkQwIkmBh5BHnMgW2JZWpFFpQPia_jOHKxx9sRFi5s-0cz7XQs2NTcKwqxgjbgZAoQgBP-K5sdO2eMTTP_ZlOSPbpjtXFvA5p8F_fXgDCmw3SX7ClHO4VL_ssZYN_Z6IqFyPe5Ck7vu0IOr2KM4wxKO_UuTT2k37y68drohLogwG8OFGVblXcqWpfgcrtrm4ekWqywbtyQtlCtLtNIAFS62cIURPLW7gqBlqNN48xjmdBFU-zNYFEB4k7EMZeMtM2MWY-be7egbtp74-3o6FzyA5-7WW1KafAnB73aDYxgzl-3Wi0HIaOWfTDY4pKYA0vUEb7-awTeqF1bOexX0M1o4n7RbRwD79CjruuN-bERUkDtqnx7DAoeB6Qx8NYKbdcl2LEJIjO9