TOP TIPS TO CATCH CARP IN THE AUTUMN!

Silt is probably the least fished type of lakebed for many anglers, with many looking for that firm crack down and that tell-tale pull back of gravel for optimum rig presentation. Yes, gravel spots can certainly be effective, but come the later end of the season when the carp have been extremely pressured on the same spots time and time again, they certainly wise up to bait and rigs in these areas. Instead, looking for a seam of silt, whether that be at the seam of the gravel or a depression in the lakebed or a small patch among the weed, the silt is much less alarming to a carp when enticing it to feed. 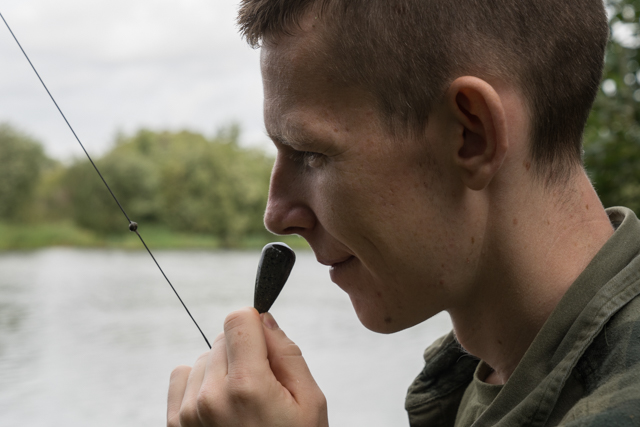 Silt can come in many different forms and despite some smelling pretty foul in places, some silt is near- on odourless. The most effective way of finding and then determining the depth and smell of silt is through the use of a small grappling style lead. By using this type of lead, you will quickly be able to determine the exact makeup of the lakebed. Silt will pretty much always allow you to pull the lead smoothly over it, with very little vibration at the rod tip. If the lead can be pulled smoothly, but there are the odd taps from gravel, this will signify that the silt is quite shallow and potentially very fine.

When pulling the lead back, if it is smooth, but also a heavy feel, this could signify deep silt. As silt can vary in different areas of the lake, it is best to have a thorough lead around to determine what areas would be best to target. I have always found small silt spots among weed very effective, and although they can be tricky to find, they are certainly less pressured and will often throw up some rarer fish. I always check the smell of the lead to determine if the silt is rancid or clean, rancid silt does have the tendency to taint baits, so I always try to avoid fishing amongst it. 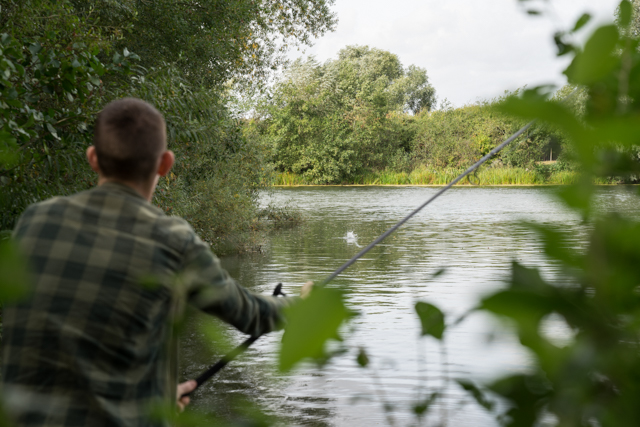 Staying mobile is an aspect of my angling that has always been an important part and no doubt added bonus fish during trips that could have been unsuccessful if I stayed put. Watching and looking at all times of the day and night will often give away small windows of opportunity that you can capitalise on. During Autumn, the fish can be very active at certain times of day, this could also be the case during the night, so it is worth setting an alarm and waking for half an hour during the hours of darkness to try and work out where they want to feed. I strip my kit right back which makes moving much easier, only carry the essentials and leaving any spares/ extras in the van. I closely monitor the forecast and try to plan my trip around changes in the weather, be that a fresh warm wind or a drop-in pressure. Weather changes, with a boost in oxygen levels can often trigger an aggressive feeding response and by timing your sessions around these peak periods can certainly result in some action. Big winds can occur regularly during the Autumn period and will often spur fish into a feeding frenzy, especially if they are a fresh new wind such as a South Westerly. 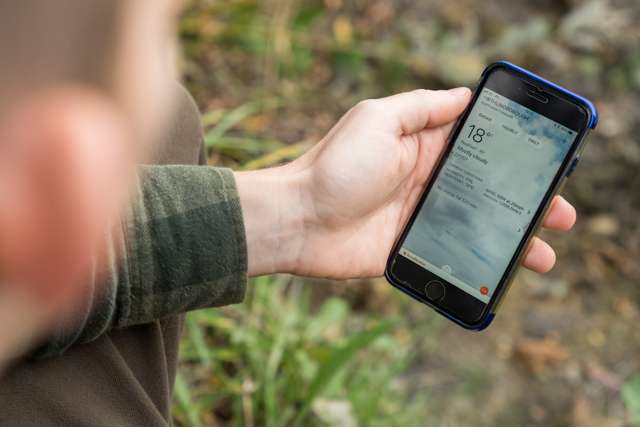 Autumn is certainly the time of year that I feel match the hatch type hookbaits come into their own, especially if you are baiting with quantities of boilie in an area. Match the hatch are much less obvious to the passing carp as opposed to a bright, stand out hookbait that they may have seen for a number of months previous. Corkball Tuna pop- ups are my preferred hookbait, as they perfectly colour match the loosefeed offerings that I use. To give my hookbaits that boost of attraction to combat the silt/ debris I may be fishing over, I lightly coat them in the Pacific Tuna Booster Spray around 4/6 weeks prior to use. The bait spray is quickly absorbed and adds a distinctive boost in aroma and food signals around the hookbait itself, while still retaining the buoyancy and visual properties that I require from a corkball hookbait. Most anglers will write off the margins once the temperatures start to drop, but in fact they can be equally as effective during the Autumn as they are during the heights of summer. As long as there is a decent depth to the margin, the ledges or edges of the slope off are certainly attractive patrol routes for carp. Nutrient rich larders can be found on the slopes of the margins, including silt pockets and clay, which are extremely attractive to carp at all times of year, if you can keep the bait trickling over a period of a few weeks, you will condition the carp to visit and feed regularly in that area. I have found that spreading the baits out over a large zone can encourage the fish to graze in an area and then become more catchable, picking up baits and moving between others. It seems that a lot of anglers now are very spot specific, baiting tightly and placing close together. There is no doubt that fish wise up to these tactics and like mentioned earlier, those polished spots are approached with caution. At this time of year, I prefer to find wider areas where I can spread my bait over, probably the size of a tennis court and then position three rigs among the area, looking for those silts spots to present on. When spreading baits, I use the throwing stick and generally stick to one size of bait in order to ensure that they fly at the same distance. If the gulls are a pain on the water you are targeting, baiting on last light can be the most effective way in ensuring that all of those baits hit the lakebed. 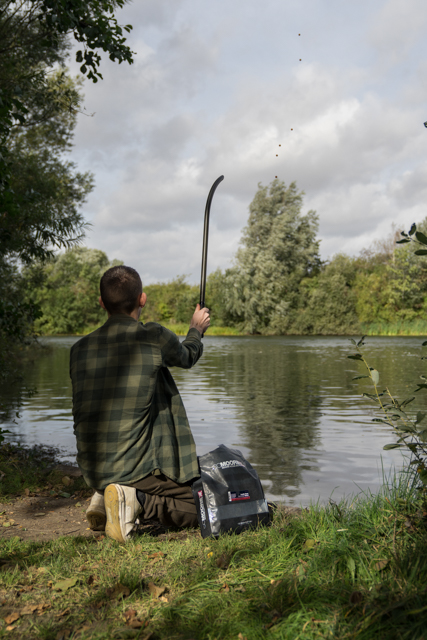 With the hours of darkness lengthening, being prepared, especially when doing overnighters between work is vital. I try to utilise my time effectively and have rigs tied before trips, so that I can get rods in place quickly when turning up after work. I also keep a power pack in my bag charged at all times, this is ideal for keeping the mobile and headtorch topped up. I have found that when targeting the silty areas of the lake, the helicopter rig is the most versatile and effective presentation in ensuring that your hookbait is laying flush to the lakebed and ready to be picked up. By adjusting the top bead on the helicopter, you can quickly adapt to meet any situation, which is also important when staying mobile and moving onto fish. 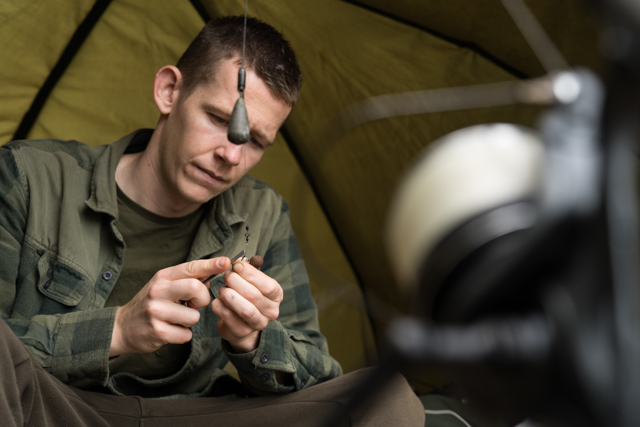 When spreading the baits, I have found the Hinge Stiff rig to be the most effective presentation, ensuring that the corkball hookbait is proud of the soft silt that I am presenting over. The rig mechanics of the hinge rig allow the hookbait to kick out and settle effectively over the lakebed, whether that be deep silt or thin softer silt, when combined with the helicopter rig that I use. I also pay close attention to the sharpness of my hook, ensuring that they are pin sharp, as the fish are often approach individual baits with this approach and a sharper hook will no doubt prick much better when the bait is sucked in. 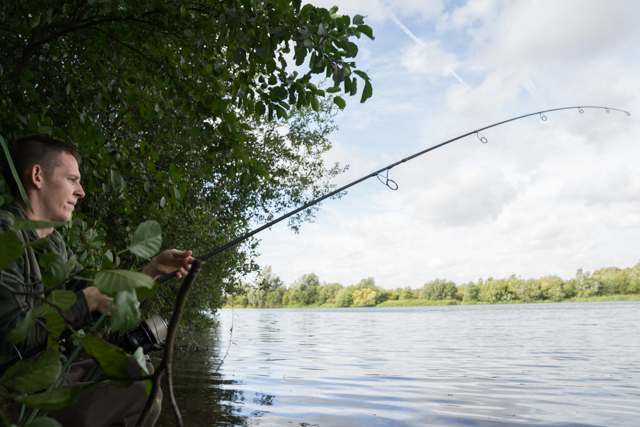 Autumn can be a productive time of year, but by carefully considering your approach and making those slight tactical tweaks will often swing the odds in your favour. These are just a few pointers that I have ultimate faith in doing and put into my own angling, but no one water is the same and you may find that certain switches work better on your venue during this transition period of the year.