The mirror carp is one of the most common types of carp in many waters around the world. It has a history that goes back hundreds of years, and it definitely is a very interesting one. As I frequently fish for mirror carp myself, I decided to write an in-depth article about this marvelous fish.

The mirror carp is closely related to the wild common carp and gets its name from its big and shiny scales that often resemble a mirror. Mirror carp are most commonly found in Europe and North America. It is a rather deep and round fish that can reach a weight of more than 80lb.

This article contains the most interesting facts about and some of the very best images of mirror carp. So make sure you read it all the way to the end if you want to learn more about the mirror. The mirror carp typically has a brown or dark-brown back and a yellowish or sometimes even whitish belly.

Its head often has the same or a similar color to its back, while the fins of the mirror carp are commonly colored similarly to its belly, except for the tail fin, which sometimes is as brown as the carp’s back, and sometimes light brown or even brightly red in color.

Despite its close relationship to the wild common carp, which has a rather aerodynamic and torpedo-shaped body (due to its origins in river systems), the mirror carp, which has historically been stocked and bred in smaller lakes and ponds, has a plump body size.

This fish can get extremely round, deep and pack up a lot of fat reserves. Big mirror carp are often very big and compact fish.

An angler who wants to hold up a big mirror for a picture needs to have a lot of strength and a wide grip in order to hold the fish in its entirety. It can be really massive!

The mirror’s scales are probably its most obvious feature. This fish is very scarcely scaled and sometimes only has a few patches of scales of varying size scattered over its body.

Tight patches of scales are most common near the tail fin, as is a lighter scaling along its back. There are usually also a few scales found just behind the mirror’s gills.

The rest, and even those more “standardized” scale patterns and locations can look extremely different from fish to fish.

This unique and irregular scale pattern is the reason why individual mirror carp can be recognized so easily by anglers who catch them. It’s also the reason why many of them have gotten names.

For example, the old English record mirror, called by the legendary Chris Yates at Redmire Pool in 1980, was called the Bishop.

The mirror carp’s mouth is rather big and it enables the fish to scoop up large amounts of feed off the bottom. The mirror’s extendable lips remind one of a vacuum cleaner, and this fish doesn’t have many limits when it comes to food!

On each side of its mouth, the mirror also has the, for carp, so distinctive barbules.

The size of its fins can be explained by how much body mass this fish has to carry and balance underwater! They act as rudders of the small-scale submarine that is the mirror carp!

Where Can You Find Mirror Carp? Virtually all countries in the European Union are home to the mirror carp. It is a commonly stoked fish in thousands of lakes, ponds, fisheries and rivers, and a very popular target fish for anglers.

There are gigantic carp fishing scenes in countries such as France, Germany, England, the Netherlands, Belgium, and Italy, to name a few.

The mirror carp is also a common fish in North America and can be found in many lakes and rivers in the U.S. and Canada, where it was first introduced in the mid-1800s.

Since the 1950s, it can also be found in many water systems in South American countries such as Mexico, Brazil, Haiti, and Guatemala.

More likely than not, it has spread to other parts of South America from thee, via the continents numerous gigantic river systems.

How Big Do Mirror Carp Get?

The average weight and size of a mirror carp is 15 to 30lb and 25 to 25 inches. The mirror’s average weight is somewhat higher than that of the common carp, due to its fuller and deeper body shape and larger fat reserves.

A mirror carp of over 40lb, regardless of where in the world you catch it, is considered to be a really big fish.

Mirrors that weigh more than 60lb can undoubtedly be called giants!

But, this carp type does not stop at such weight levels, it can grow even larger than that! Mirrors of over 80lb have been reported, many of which were caught in the big carp fisheries of France and Hungary.

Only very few specimens grow beyond 100lb and these are mirror carp that are extremely old creatures. The current world record mirror is an unreal fish of 114lb 14oz that was caught at the Hungarian carp fishery Euro Aqua in 2018.

The question of how much the world’s absolute biggest, hitherto uncaught mirror carp could weigh remains!

How Long Can Mirror Carp Live For?

The average age of a mirror carp is said to be around 20 to 25 years.

The maximum age of mirrors, on the other hand, is not really determined. Specimens older than 50, and even 60 years have been captured and observed in captivity, but no one really knows how long they can live for!

There could be truly ancient fish of well over 80, perhaps even 100 years out there somewhere in a long-forgotten pond in the middle of nowhere!

These wise and ancient carp are just waiting to be discovered, but be aware: they will not be lured easily!

History of The Mirror Carp 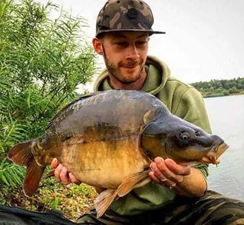 The mirror carp has its origin in Europe and is a slightly genetically altered version of the common carp.

The first official records of European carp date back to Austria in the year 1227.

The country’s nobility of that time urged to have their estates’ and castles’ ponds stocked with carp, as it was seen as a delicate meal that only the very rich and powerful could enjoy.

More and more European nobility, and later on also monks and clergymen started to stock their ponds with carp for food. And hence, more and more carp were prepared in kitchens and on tables all over the continent.

When carp were first brought to England, in 1496, it had already become a widely available food source, which was now not exclusively served to the nobility. As the standard of living in Europe and Greta Britain rose, so did the demand for carp.

The cooks of that time noticed that it was rather difficult to prepare the carp for dinner, as they had large and tough scales all over their bodies.

I have never scaled or killed a carp myself, but I can imagine how difficult and probably also painful that must have been!

So, they started to slowly strip the carp of most of their scales, exposing their flanks and bellies and making them more accessible for the cooks to prepare.

This process was repeated for years and years and eventually, new generations of carp started to have fewer and fewer scales. It was the dawn of the mirror carp!

When people started to emigrate to the New World during the 1800s, they did no longer want to live without the taste of carp, and soon thereafter, the first carp were brought to the North American continent.

Here, more and more people started to ask the government to stock carp in wild waters all over the country, to ensure a future food source for the new settlers.

In 1877, the government finally granted the peoples’ requests and imported the U.S.’s first-ever common and mirror carp, which were stocked in ponds in Baltimore.

After that, they were brought to Washington D.C., where they were farmed. From the capitol, they would slowly spread throughout large parts of the United States, and eventually even into Canada.

Can Mirror Carp Grow Back Their Scales? The mirror’s loss of its scales goes back hundreds of years ago, but recent research suggests that they might reverse their evolution and eventually grow back their long-lost scales.

The study explains that researchers had observed partially or fully scaled carp in water systems in Madagascar. But originally, only scarcely scaled mirror carp had been introduced to those waters a hundred years ago.

Back in 1912, French colonizers started to introduce the mirror carp to certain lakes in Madagascar for fish farming purposes. Already at the end of the 1950s, old records show that many carp had “degenerated” to scaled phenotypes.

The research concludes that roughly 36% of the original mirror carp population, in both wild waters and fish farms, were fully covered with scales.

This indicates that it is indeed possible for mirror carp to grow back their scales, even though they should lack the genetic ability to do so.

What Do Mirror Carp Eat?

The mirror carp is an omnivore. As such, its natural diet both consists of plant-based food sources and smaller animals that live on or in the bottom. These can include the following:

When it comes to fishing baits, the mirror carp is not a very picky eater here either! Common and successful baits for mirror carp can include:

How to Fish for Mirror Carp? As the carp is a bottom feeder, the best way to fish for mirror carp is by ledgering, which means fishing your bait on the bottom using a weight.

Some of the most commonly used methods and rigs for carp fishing on the bottom include:

In most cases, carp anglers will fish with two or three rods in order to cover different areas in a venue and to maximize their chances of getting bites.

Carp are most active during the night and the morning hours (although there can be local exceptions to this general rule), which is the reason why most carp anglers are using bivvies (fishing tents) and bite alarms on the bank.

This equipment allows them to fish through the night while being able to get a little sleep as well. The electronic bite alarms will let them know once a fish has taken the bait.

It’s a very convenient and effective way for fishing that has been around for many years.

Can You Eat Mirror Carp?

You certainly can, even though it is not the tastiest of fish. In many countries, carp is a commonly eaten dish.

In the olden days, people used to eat carp much more, both in Europe and North America, as life was hard and food simply was not easy to come by.

After all, that’s the sole reason they were bred by monks and fish farmers in England back in the 17th, 18th, and 19th centuries.

Nowadays, it is mostly people in economically less fortunate countries that still consume a lot of carp. But it must never be forgotten as the important food source it once was!

I myself was born in the former state of Eastern Germany and remember the traditional carp blue dish that my family would serve for Christmas.

I also remember the small live carp that we would pick at our local fish store a couple of blocks from our apartment in East Berlin.

Those were completely different times, and it has only been around 30 years since then. Times, and life in general, can change quickly sometimes!

I’ll never forget the stench that surrounded that little fish store back in Berlin! It was a very special, intense odor that was not pleasant at all.

Nonetheless, I’ll always associate it with the excitement of seeing live fish in the middle of the big city!